Fashion and Activism – Trend or Platform, Transform the World, and More 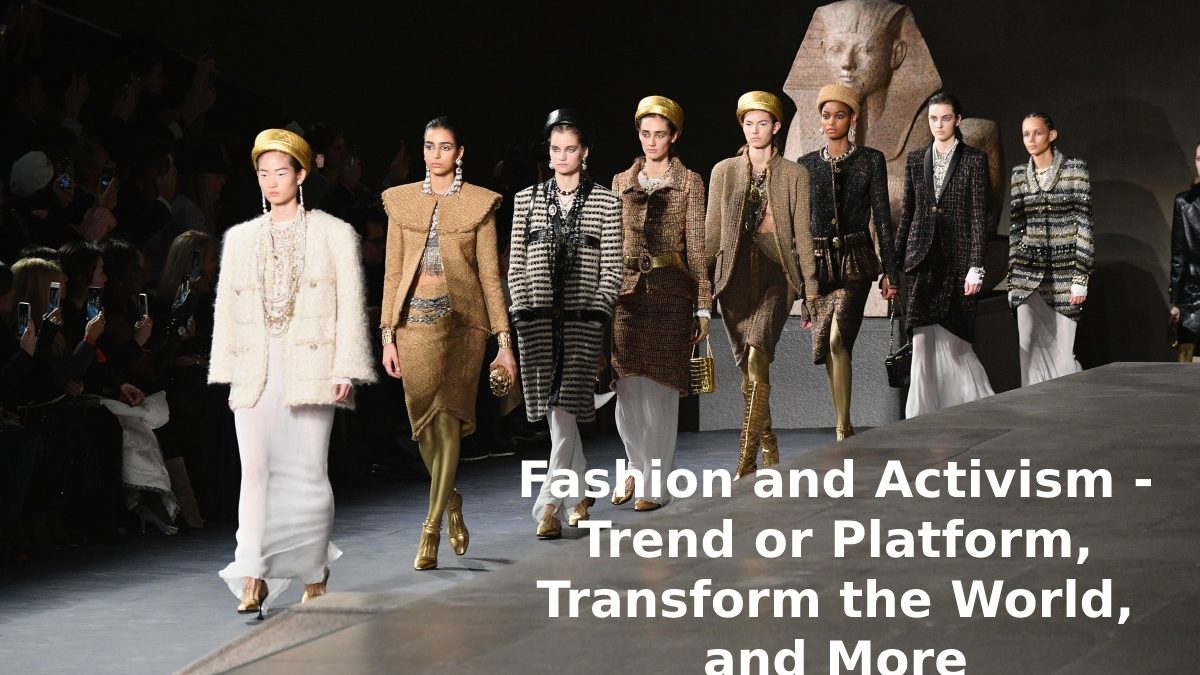 Fashion and Activism, when the union is Strength

Fashion and Activism have long been walking in the same direction. To break down social and racial barriers within the industry. Thanks to t-shirts with messages, Fashion has made us reflect throughout history on various issues. Here we tell you everything!

Fashion is the perfect language for designers to express their ideas and communicate everything they want to convey. Many of them use their voice to speak out on the issues that most concern us all as a society. The fashion world joined in the Activism when designer Katherine Hamnett stood before Margaret Thatcher, Britain’s prime minister at the time. Wearing a t-shirt that read “58% don’t want Pershing.”Denouncing the missile that US troops had been deployed to European bases to respond should the Soviet Union attack.

From then on, t-shirts with activist phrases became the primary claiming tool. Today Katharine Hamnett continues to speak out on the social issues that concern her the most, such as climate change, leaving Brexit or racial discrimination. For her part, the designer Vivienne Westwood also played (and plays) a critical role in Activism, claiming the need for more sustainable Fashion.

Fashion is the reflection of society, political or social movements and thoughts. it goes beyond clothing, trends and styles: it can also be a political act. (For this essay, politics will be implicit as the decision-making process for all numbers of people in society, according to the explanations offered in the course Fashion and Human Rights? dictated by Dos Latinas y Culturas de Moda in July 2020.)

It is perhaps the most direct way of expressing who we are, what we feel, and, sometimes, representing positions, whether ideological or political. The figure of the designer has a critical role in Fashion since they are the ones who design the garments, the intention and vision of the collection, the trend and the narrative; they are the people who often decide what will use in the season. However, it is essential to understand the role designers have, since some can design for design’s sake, that is. Think only about aesthetics and trends. However, some designers know their platform very well, their public. And understand the context in which they develop to create collections with a purpose beyond aesthetics and adopt political messages and visions. An example of this is the Englishwoman Vivienne Westwood.

Today, it is complicated to draw between trending and a “deeper” meaning. When talking about Fashion as a political act. It can think that whoever gives it this added value is the person who wears the clothes and not the person who designed them. The world is in a stage of change, and we can often ask ourselves if Fashion is aware of these changes or simply a marketing strategy. For example, diversity and inclusion, sustainability, genderless (or “without gender”). Political messages and trends of “empowerment” of those people considered vulnerable are themes. Frequently used by fashion houses, designers and, in general. People from the industry to generate “awareness” about the world we live in.

Activist Fashion to transform the world

New generations are committed to political and social causes that drive Fashion towards a new form of Activism.

The commitment of the new generations to political and social causes drives Fashion towards a new form of Activism.

A reversible jacket with the letter of the first amendment of the United States Constitution. A necklace with the phrase “We the people”. And a Benetton campaign that reminds us that one hundred million young people are looking for work in the world are just some of the examples. Of the so-called fashion hacktivism.

It is a proposal that has consolidate with several approaches:

A Guide to Funeral Planning for Your Grandparents

What is Kalki Fashion

Your Guide To Buying The Perfect Affordable Watch This Year