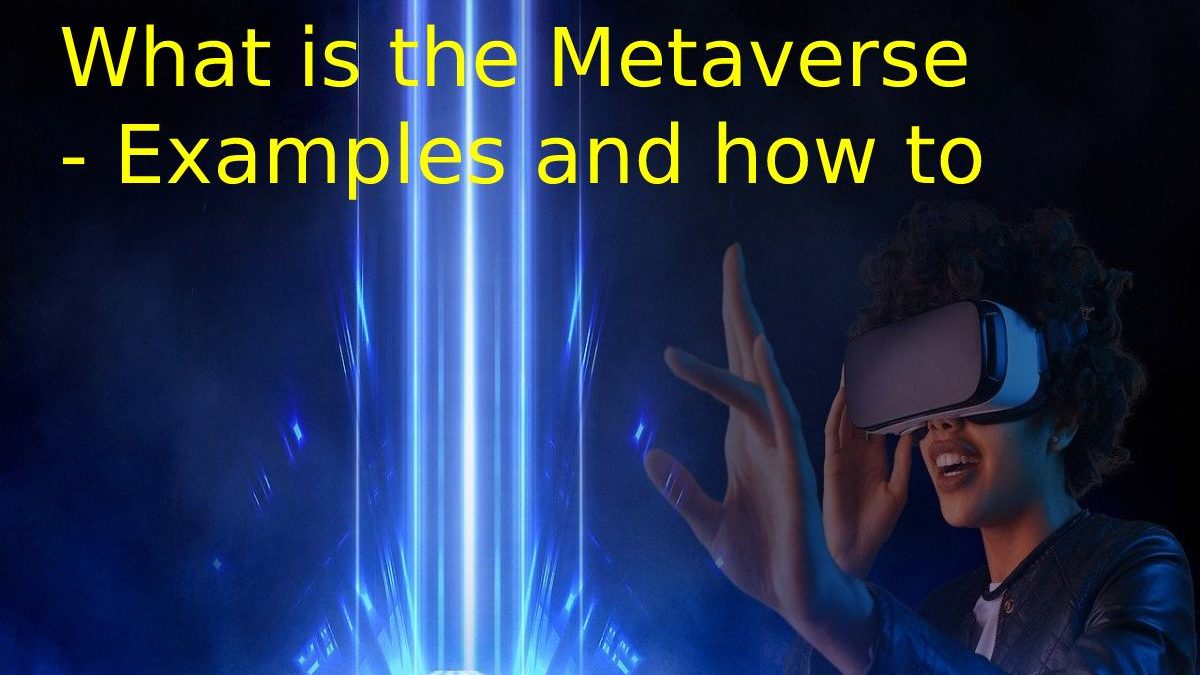 Recently the Metaverse is one of those words that keep coming out of our heads from constantly hearing them in the media. The truth is that the idea of ​​the Metaverse is exciting, but it is not a new concept at all. Do you want to know its history and understand it once and for all? In this post, we will tell you what the Metaverse is what types of Metaverse there are, and we will give you examples of other metaverses, among many other things. Will you accompany us to the future?

What is the Metaverse?

The Metaverse is a digital realism that we access through special devices such as virtual or augmented reality glasses through which we can interact with other users. Every of these users will have an avatar (their character in the virtual world) and will interact through objects in immersive worlds.

It is like a second digital reality where we can interact with our friends. Work with our colleagues, enjoy our partners and even have a job in the digital space.

To understand the term “metaverse,” try mentally substituting it in a sentence for “cyberspace.” However, most of the time, the meaning will not change much. This is because the word itself does not refer to a specific type of technology but to a change in the way humans interact with it.

Typically, the technologies that make up the Metaverse include virtual reality. Characterized by virtual worlds that continue to exist when you are not even playing, such as augmented reality, which combines aspects of both digital and physical worlds.

The Metaverse does not necessarily require access to those spaces through augmented or virtual reality. For example. Forbite fulfils various characteristics of a virtual world, which you can access through a computer or mobile, so we could say that it is Metaverse.

The Story of the Metaverse: Snow Crash.

We are not precisely clear about the origin of the Metaverse, but what we can know is when people started talking about it. The first references to the Metaverse appear in a novel by Neal Stephenson, Snow Crash (1992).

The novel tells the story of Hiroaki Hiro, the Protagonist, a pizza delivery boy in the real world, but a warrior prince (samurai) in the Metaverse. Given a moment. Hiro discovers the existence of a powerful computer virus in the Metaverse, called Snow Crash, and the discovery of more about this virus will be the central axis of the plot.

What is relevant about this book is that Neal created the first written reference to a completely virtual world long before cyberspace could speak of. In his book, Neal introduces the idea of ​​avatars (or virtual characters of real people in the tangible world).

What is an Avatar?

An avatar is a personalized three-dimensional character that you have to create to access the Metaverse. And that is the interface through which you will interact with the rest of the people in it.

The key to this process is that we will create our avatar by designing it as close as possible to our real-world personality and appearance.

Features of the Metaverse

One # They are Interactive Spaces

A user in the Metaverse can communicate and interact both with other users/avatars and with the virtual universe itself. It also adds a causality feature since users are part of the changes around them.

Two # They are Corporeal Environments

Secondly, these virtual spaces or metaverses characterize by being subject to the laws of physics. And there is a shortage of resources, just as it happens in the tangible world as we know it.

Three # It is Persistent and Autonomous by itself

Finally, thirdly, they are also persistent and autonomous on their own. This means it is still working even though we are not using the Metaverse. This gives it the property of being a living organism, in which. Regardless of whether users connect to it or not, the dynamics of the world continue to function.

Four # It is Decentralized

The Metaverse is not owned by one company or a single platform but by all its users. Who can control their private data? Blockchain knowledge is a big part of this because it ensures that all transactions within a virtual world are public, easy to track, and secure.

As a 3D virtual space, the Metaverse removes all kinds of barriers, physical or otherwise. It is an infinite space with no limits on how many people can use it simultaneously, what activities, what industries can enter etc. As a result, it expands accessibility more than current Internet platforms.

Lastly, users can participate in decentralized virtual economies powered by cryptocurrencies. This includes marketplaces wherever users can buy sell. And trade digital assets such as avatars, virtual clothing, NFTs, or event tickets.

What can you do in the Metaverse?

Now that we know a lot more about the Metaverse world let’s see what we can do about it.

For years there have already been video games like Minecraft and Roblox that have offered experiences similar to those of the Metaverse. However. In 2020 others such as The Sandbox and Decentral and have appeared that have boosted the economy of video games by adding digital assets. So not only can you import your own NFTs into the fun and buy virtual lands. But you can also use the ones from the game itself to improve your situation in the virtual world by enabling, exploring, or building spaces.

NFTs aside, these games play like any other. You can wander through the different virtual worlds, hanging out with the brands and celebrities fighting to corner the market.

There are also virtual spaces such as shopping malls, art galleries or squares where you can walk. Talk to people, play games, build buildings or attend events. Some even organize their music concerts.

Without a doubt, the magic is in the relationships that can form with other users. There are many gathering spaces in the Metaverse. While you can meet in substantial open worlds like The Sandbox. You can also play in custom rooms on platforms like Spatial. These applications are specifically designed to hold events, conferences or meetings.

Review What is the Metaverse – Examples and how to Access it. Cancel reply